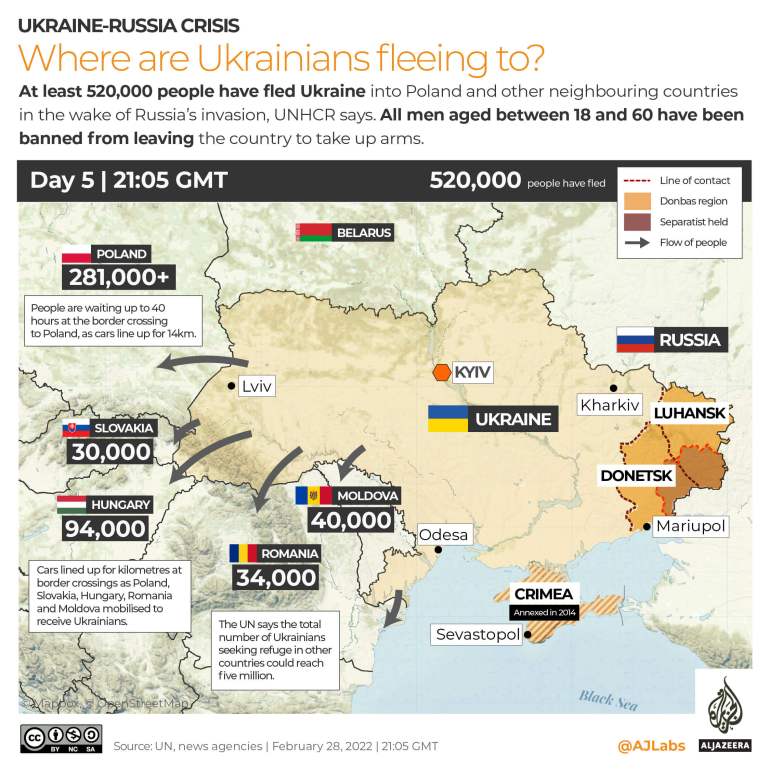 Ukraine’s president says Russian troops have intensified shelling of Ukraine in an effort to force his government into making concessions during talks held earlier on Monday.

In a video address, Zelenskyy said that “the talks were taking place against the backdrop of bombing and shelling of our territory, our cities. Synchronizing the shelling with the negotiating process was obvious. I believe Russia is trying to put pressure (on Ukraine) with this simple method ”.

The president gave no details about the hours-long talks themselves. But he says Ukraine is not prepared to make concessions “when one side is hitting each other with rocket artillery.”

Zelenskyy says that Kyiv, the capital, remains “a key goal” for the Russians and that Russian forces have also shelled the city of Kharkiv with rocket artillery.

Zelensky seeks ban on Russia in all global airports and ports

Ukraine’s president is seeking a global ban on Russian planes and ships as punishment for attacking his country.

“We must close entry for this state in all ports, all canals and all the world’s airports,” Zelenskyy said on Facebook. He also urged the international community to “consider a total closure of the skies to Russian missiles, planes and helicopters”.

Ukraine’s minister of digital transformation says equipment to use SpaceX’s Starlink satellite internet service has arrived in his country.

Mykhailo Fedorov thanked SpaceX founder Elon Musk for the equipment in a Twitter post Monday that was accompanied by a photo of boxes on the back of a truck.

Starlink is a satellite-based internet system that SpaceX has been building for years to bring internet access to underserved areas of the world. It markets itself as “ideally suited” for areas where internet service is unreliable or unavailable.

You are most welcome

“Canada will continue to deliver support for Ukraine’s heroic defense against the Russian military,” Trudeau told reporters in Ottawa. “We are announcing our intention to ban all imports of crude oil from Russia, an industry that has benefited President Putin and his oligarchs greatly.”

Canada has already sent weapons and non-lethal support to Ukraine, and has backed a number of sanctions, including supporting the removal of Russia from the SWIFT system for international bank payments.

“We are providing even more lethal aid to Ukraine, and we’ll be sending 100 Carl Gustaf anti-tank weapon systems and 2,000 rockets, which we will be working to deliver as quickly as possible,” Defense Minister Anita Anand said. 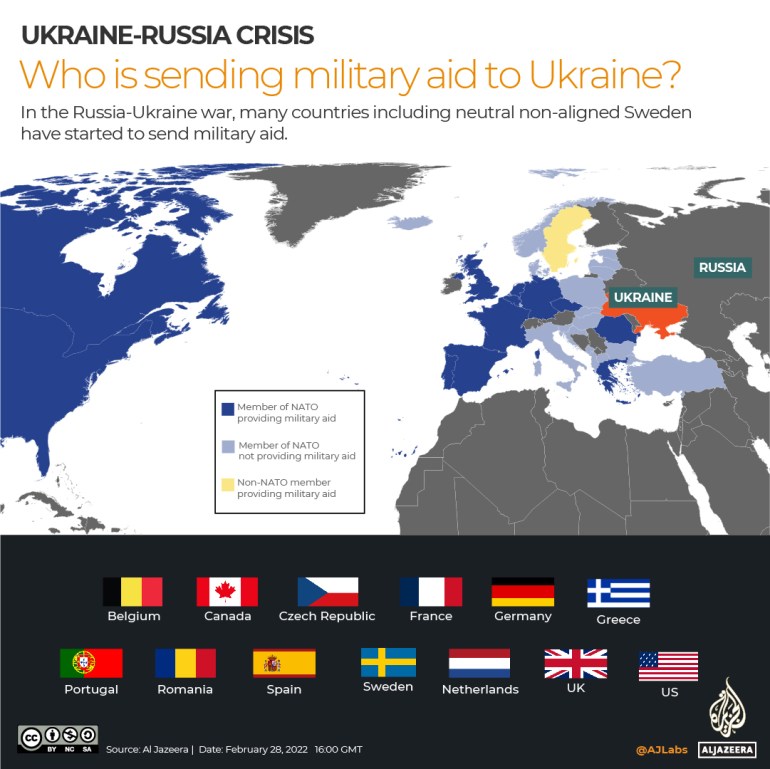 Ukraine’s president has signed a decree temporarily lifting the requirement for entry visas for any foreigner willing to join Ukraine’s International Defense Legion and fight on Ukraine’s side against invading Russian troops.

Zelensky’s decree takes effect Tuesday and will remain in effect as long as martial law is in place.

White House press secretary Jen Psaki told reporters that implementing a no-fly zone would be a step toward sending US troops to fight Russia.

“A no-fly zone would require implementation,” she said, adding it would require deploying US military to enforce, which would be… potentially a direct conflict, and potentially a war with Russia, which is something we are not planning to be a part of ”.

Ukraine presses US for more assistance

Ukraine’s ambassador to the United States, Oksana Markarova, met with US lawmakers on Monday to press for more assistance to stave off Russia’s attack.

“The devastation that Russia is trying to inflict on Ukraine is large,” Marakova said after leaving the meeting, accusing Russian forces of using a “vacuum bomb”.

Democratic Representative Brad Sherman, who attended the meeting, said the Ukrainians had asked for a US-enforced no-fly zone over Ukraine but that he felt that was too dangerous because it could provoke conflict with Russia.

Democratic US Senator Chris Murphy ruled out approving a no-fly zone for Ukraine in Congress, saying the move would amount to war between the United States and Russia.

“It’s a bad idea and Congress would never authorize it,” Murphy wrote on Twitter.

“Military equipment for Ukraine, humanitarian support for Ukraine, crippling sanction on Russia, movement of US troops to the eastern flank of NATO – these are all the right moves. But direct war between the world’s two nuclear powers should be a non-starter. ”

There’s been a lot of loose talk from smart people about “close air support” and “no fly zones” for Ukraine.

Let’s just be clear what that is – the US and Russia at war. It’s a bad idea and Congress would never authorize it.

Meta’s head of global affairs, Nick Clegg, tweeted on Monday afternoon that the social media company had received requests “from a number of Governments and the EU to take further steps in relation to Russian state-controlled media”. Read more here.

US not considering no-fly zone in Ukraine

Hours before Ukrainian President Zelenskyy urged a no-fly zone for Russian aircraft on Monday, Pentagon spokesman John Kirby said Washington is not considering such a move.

Ukrainian President Volodymr Zelenskyy said it was time for the West to consider imposing a no-fly zone for Russian missiles, planes and helicopters in response to Russian shelling of the Ukrainian city of Kharkiv.

In a video address, Zelenskyy did not specify how and by whom a no-fly zone would be enforced. He said Russia had launched 56 rocket strikes and fired 113 cruise missiles against Ukraine in the past five days.

“I believe that Russia is trying to apply pressure in this unsubtle way. Do not waste time. We do not accept such tactics. Fair negotiations can occur when one side does not hit the other side with rocket artillery at the very moment of negotiations, ”he said.

Read all the updates from Monday, February 28, here.