As Russia’s invasion of Ukraine has intensified, so have the rhetorical gymnastics of diplomats from the country’s giant neighbor that is also one of its few large remaining international partners: China.

Their attempts to balance Beijing’s policy of support for global peace and stability while avoiding any criticism of Moscow are a sign that the war is unlikely to derail China’s quasi-alliance with Russia, diplomats and analysts said.

“The Chinese foreign ministry is doubling down on their alignment to Russia, so we are learning in real time what they mean when they say there are ‘no limits’ in their partnership,” said Evan Medeiros, a China expert at Georgetown University and former senior Asia policy adviser to Barack Obama.

China’s close ties with Russia theoretically created a “strategic trilemma” for Beijing, potentially clashing with its other foreign policy principles, such as protection of states’ sovereignty, and with other important economic relations with the US, Europe and elsewhere, he said.

“But they are clearly privileging their alignment with Russia and pursuing something I would call pro-Russia neutrality.”

Beijing has been here before. Both in 2008, when Russia sent troops into Georgia, and in 2014, when Moscow annexed Crimea, Beijing avoided directly backing Russia’s actions but also refused to criticize them.

“China and Russia handle their partnership on two levels. On one level is rather non-committal rhetoric about conflicts in each other’s neighborhoods, and on another is the strong alignment when it comes to great power competition, ”said Alexander Korolev, a lecturer at the University of New South Wales who researches the China-Russia relationship.

“There is a stronger rhetorical support from China for Russia in its resistance against NATO expansion this time.”

Some western analysts believe that starting a war in Europe may put too great a strain on the partnership to keep up this pragmatic pattern.

“Russia does have a penchant for destabilizing actions, while China has this desire to rise to great power status on its reputation for prudence and stability,” Andrea Kendall-Taylor, senior fellow at the Center for a New American Security and a former intelligence officer working on Russia, said at a debate this week.

She added this contradiction might introduce fissures in the relationship. “So far it has deepened without any side having to incur any cost for the other. That is going to be put to the test in this case, ”she said.

Until the eve of the attack, Chinese state media was still calling US warnings of a Russian invasion disinformation. “It was a shock to wake up to [the invasion] because we still thought he was bluffing, ”a Chinese diplomat said, referring to Vladimir Putin, the Russian president.

“There is an element of surprise in the expert community and among the public about the mode and scale of Russia’s action,” said Zhang Xin, a Russia expert at East China Normal University. “It is possible that more concrete information was exchanged between the two leaders.”

Zhang said it was “slightly embarrassing” for the government to reiterate principles, such as respect for territorial integrity, while accommodating Russia’s military action and also being at odds with Chinese interests such as the aim for common development and prosperity in Eurasia.

But this seemed to be a minor concern for Beijing. “No matter how much bloodshed we see in this conflict, unless it becomes an all-out regional war and great powers get pulled in, I do not think it will have an impact on China’s bilateral ties with Russia,” Zhang said.

One reason is the personal stamp Putin and China’s Xi Jinping have put on the relationship.

“There is definitely some personal rapport and chemistry between them, to the extent that you could almost speak of a personal alliance,” said Artyom Lukin, an associate professor at Far Eastern Federal University in Vladivostok, who believed Putin informed Xi of his plans.

Putin is not completely mad – he must have understood that he needed support from China on this. Moreover, not informing Xi could have been a personal affront. ”

Analysts also said Xi had shown a higher acceptance of risk and friction in foreign policy during his nearly nine years in office than his immediate predecessors, reflected in his pursuit of a more confrontational and assertive stance in disputes with neighbors. This made Putin’s actions more palatable to him.

Sanctions may be a more serious test. China is expected to offer Russia respite, for example by increasing commodities trade through state-owned policy banks that have less trouble circumventing US sanctions.

“Look to North Korea for reference: All trade with them is banned under international sanctions and yet China accounts for 95 percent of their foreign trade,” Lukin said. 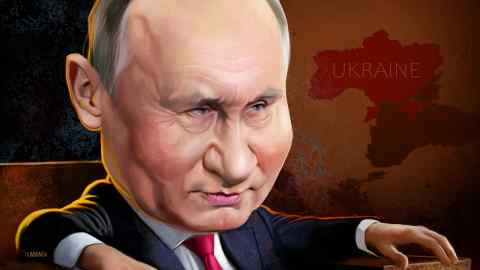 In Washington, policy experts therefore believe that only raising the cost of backing Russia could make China think again.

“I do not think Beijing is terribly uncomfortable with Putin’s play. So if you want to change that calculus, you have to change the pay-off, ”said Yun Sun, director of the China program at the Stimson Center.

“If Russia works with Chinese financiers, in order to block that channel, the US needs to increase the cost for China Eximbank and China Development Bank,” she added.

But for now, western governments have their hands full with responding to Russia’s invasion. “The Russia conversation is moving fast,” Medeiros said. “But the ‘what do we do about the Russia-China relationship’ conversation – it has started, but it has not reached terminal velocity.”