The S&P 500 retreated after notching the biggest two-day rally since April 2020.

Stocks fell as Russia poured cold water on reports of progress in Ukraine peace talks, adding to worries about the outlook for economic growth as the Federal Reserve’s most aggressive rate-hike campaign in two decades got underway.

The S&P 500 retreated after notching the biggest two-day rally since April 2020 on Fed Chair Jerome Powell’s upbeat economic views. Bonds rebounded, following a steep selloff on Wednesday, when part of the Treasury curve – the gap between five- and 10-year yields – inverted for the first time since the onset of the pandemic. That’s an indicator of bets on future economic growth pain as the inflation-fueling fallout from the war continues. In another volatile session, oil climbed above $ 100 a barrel.

A Kremlin spokesman said a report of major progress in talks with Ukraine was “wrong,” while adding that discussions will continue. US President Joe Biden will speak Friday with China’s leader Xi Jinping. Russia’s Finance Ministry said it has sent payment orders for the interest on its dollar bonds to its correspondent bank. So far, European bondholders of the nation’s sovereign debt have received no sign of the funds, although growing optimism the bonds may be settled is spurring prices higher across maturities. 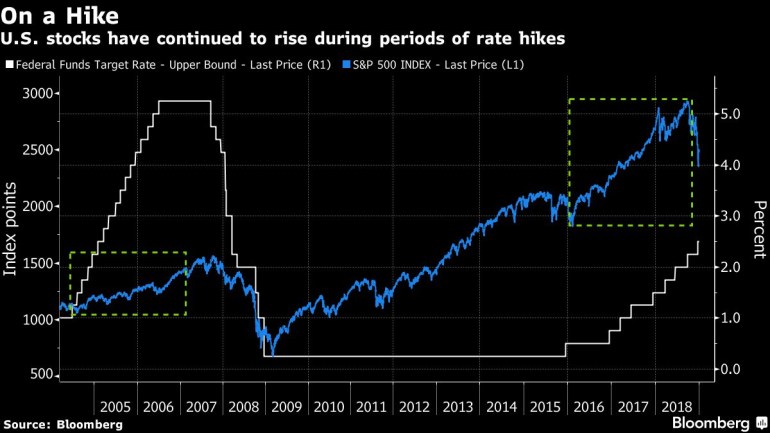 If recent history is any guide, US equity investors should not be too worried about the Fed’s decision to kick off a rate-hiking cycle. Between June 2004 and June 2006, officials raised rates 17 times, with the S&P 500 posting gains of about 12% in the span. The 2015-2018 monetary tightening period was even more positive for risk assets as the index surged about 21%.

Production at US factories rose in February by the most in four months, indicating firmer momentum in a manufacturing sector still challenged by supply constraints and higher costs. New home construction rebounded to the strongest pace since 2006, suggesting builders had greater success navigating material and labor constraints in the month.

Elsewhere, the Bank of England raised its key interest rate for the third successive policy meeting, taking borrowing costs back to their pre-pandemic level and warning the war in Ukraine may push inflation well above 8% later this year. Officials led by Governor Andrew Bailey tempered the outlook by saying that a further tightening of policy “might be” appropriate in the coming months – a softening from the wording in February, when they said such a move was “likely.”