Rishi Sunak promised to “support the British people as they deal with the rising costs of energy”. In the event, the chancellor’s Spring Statement added very little to previously announced measures and will be of little comfort to families worried about whether they will be able to afford the weekly shop.

The cost-of-living crisis was brought into stark focus by the latest annual inflation reading, which rose at the highest rate in 30 years to hit 6.2 per cent in February. That might just be the tip of the inflation iceberg. Next month the energy price cap will rise sharply and we expect another 40 per cent increase to energy bills in October. Even though we should be out of the worst of winter weather, just keeping the lights on is going to ratchet up the pressure on household budgets.

The prices of goods leaving the factory gate are at their highest level for 14 years and food products are at the top of the pile. The cost of materials is also heading up and the devastating war in Ukraine is exacerbating that. 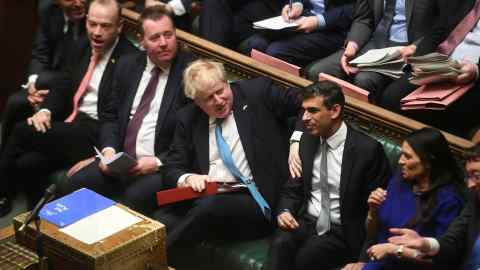 Since Russia’s invasion, the prices of oil, gas, wheat, metals and vegetable oil have soared. Making stuff, transporting stuff and ultimately buying stuff is only getting more expensive. The Bank of England had hoped 7.5 per cent would be the peak of the inflation pain, but it has already accepted the landscape has changed. Prices will get higher still – for the first time in 40 years double-digit inflation is a real possibility.

The Spring Statement was therefore a great opportunity to make some bold changes that would help households during the difficult months ahead. Disappointingly, it looks like an opportunity missed.

The big news was a cut to income tax rates, but this is scheduled to happen in 2024, so is no help to families struggling with the cost of living now – or indeed for the next two years.

There were loud calls from many corners for the chancellor to do more to help families facing rising bills today. On the basis that those bills cannot be paid with an IOU for two years’ time, many will think he’s fallen short.

The cut in fuel duty by 5p a liter means a driver of the average 55-liter car will save £ 3.30 each time they fill up. This is a tiny portion of the overall recent rise in fuel costs and is no benefit to those who do not use a car regularly or do not own one.

Savings on that scale will also do little to offset the £ 1,500 increase every household is expected to see in their home energy bills this year. And on that topic, the chancellor had very little to say besides an extra £ 500mn added to the household support fund, taking it to £ 1bn.

By bringing in the move in July, rather than immediately, the government ensures taxpayers will not get a full year of the benefit. But it will still mean that the average worker who earns more than the £ 12,570 threshold will save £ 330 a year, once the change kicks in. The government says that 70 per cent of people currently paying national insurance will see a reduction in their bill, even as it pushes ahead with the increased 1.25 per cent levy.

However, the current crisis requires more drastic action. The national insurance increase could have been scrapped or at least postponed until household finances are under less pressure and better able to shoulder the extra burden.

Sunak could have chosen to postpone freezes to income tax bands, a measure which is a stealth tax on the working population, especially with inflation rising.

Government borrowing this year is set to be £ 50bn less than the Office for Budget Responsibility forecast in October. More of that money could have been put to use helping families cope with a surge in prices they are now facing in nearly every aspect of their lives.

The author is head of personal finance at AJ Bell.