Antibacterial wipes, sports bras and a less formal alternative to men’s suits will contribute to the UK’s official measure of inflation for the first time, reflecting changes ushered in by the pandemic ahead of a cost of living crisis.

In its annual update, the Office for National Statistics on Monday added 19 products to the more than 700 items in its virtual “shopping basket” used to calculate inflation, and removed 15.

In recognition of more time for exercise and hobbies, it also added craft kits and pet accessories. The rise of homeworking, and the closure of department stores that stocked full three-piece suits, meant formal menswear was replaced by a jacket or blazer.

The changes are part of wide-ranging shifts in how the ONS measures price changes as the UK grapples with a cost of living crisis that the Bank of England expects to drive inflation to about 7 per cent by April.

It will also increase the number of prices it collects by taking information directly from tils, and offer more personalized breakdowns of inflation’s effects.

Sam Beckett, the ONS’s head of economics, said the announcement was part of a “long-term transformation” to keep the measurement of UK inflation “as accurate and relevant as possible”.

Prices for consumer goods in the UK increased 5.5 per cent year on year in January.

However, this headline figure conceals potentially bigger jumps in the prices of particular goods – a problem the ONS pledged to recognize earlier this year after food writer Jack Monroe drew attention to soaring prices of budget food products.

It confirmed on Monday it would introduce a personal inflation calculator, which individuals can use to see the impact of inflation on their own spending, in recognition of prices rising unevenly between different products and groups.

Jack Leslie, senior economist at the Resolution Foundation think-tank, said inflation looked to be the “defining economic feature of 2022”. He said the personalized calculator would help families and policymakers better understand how different groups were affected by price pressures.

“While inflation is currently broad-based, our own research suggests it could be higher for low-income households by the autumn if food price inflation grows,” he said.

Alfie Stirling, director of research at the New Economics Foundation, warned that while the changes were welcome they risked being “taken over by real-life events”.

NEF research released on Monday found that 34 per cent of people in the UK would fall short of being able to afford a “socially acceptable” standard of living by April, with the average annual shortfall being £ 8,600.

A separate report by the Resolution Foundation found disproportionate increases in food and energy costs could mean inflation in the poorest households could exceed 10 per cent by October, because these families spend a greater proportion of their incomes on food and heating. 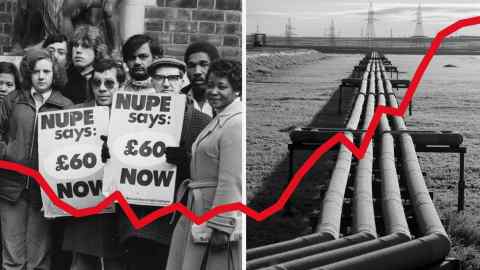 Stirling called for a package of reforms ensuring means-tested benefits rose in line with inflation to ensure the incomes of the poorest people kept up with prices.

Other items added to the ONS inflation basket included meat-free sausages and canned pulses, reflecting the growth of vegetarianism and veganism.

Coal, which will be banned for home use next year as part of government efforts to combat climate change, was one of the products removed from the basket, along with a single donut, which was discarded because homeworking has forced a shift away from purchasing individual baked goods.

There are no good choices for the west on Ukraine