Russian ruble plunges 28% after US and allies impose tighter sanctions

Russia’s currency tumbled more than 28 per cent to a record low in early trading on Monday, as a new round of western sanctions heaped pressure on the country’s financial system in response to its invasion of Ukraine.

The ruble dropped to almost 118 against the US dollar, according to Bloomberg data, following a weekend when Russian President Vladimir Putin put his nuclear forces on high alert and the US and Europe unleashed its toughest sanctions to cut the country off from the global financial system .

In an early sign of how Moscow is being pushed further to the fringes of world markets, Norway said on Sunday that its $ 1.3tn oil fund, the world’s biggest sovereign wealth fund, would freeze its investments in Russian assets and begin divesting from the country. BP, the UK energy group, also said it would divest the 20 per cent stake in Russian state-owned oil company Rosneft it has held since 2013.

The ruble had already been hit hard in the previous week, sliding to record lows following the invasion and the imposition of sanctions by the US and Europe.

The US and its allies ratcheted up those punitive measures on Saturday, taking aim at Russia’s central bank to prevent it from using international reserves. Western allies also agreed to cut some of the country’s lenders out of the Swift messaging system, a crucial piece of infrastructure for global payments.

Russians have been forming long queues to withdraw money out of cash machines, with the central bank lacking an obvious mechanism to stabilize its economy and currency.

The Russian central bank stepped in to shore up the ruble last week by selling foreign currency reserves. But the weekend’s direct sanctions against the central bank compromise its scope to keep up this support.

“Put simply, Russia’s ability to transact with any financial institution at a global level will be severely impaired, because most international banks across any jurisdiction use Swift,” George Saravelos, an analyst at Deutsche Bank, wrote in a note to clients. 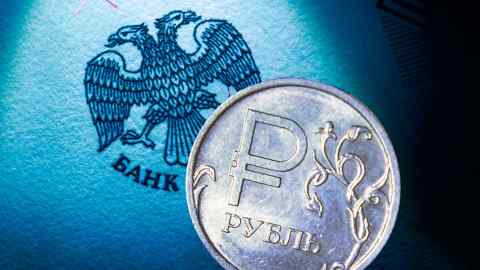 “Money markets may experience some deterioration in funding conditions this week on the back of the uncertain impact of an asset freeze on global liquidity. It would be expected that the European Central Bank, Fed and other central banks step in to provide a powerful backstop if needed and we would not rule out inter-meeting announcements, ”he said, adding that the ruble and other European emerging market currencies are likely to come under pressure.

On Friday, rating agency S&P Global cut Russia’s debt rating to “junk” status, underlining the risk that the military assault on Ukraine could prove even more deeply damaging to the country’s financial markets.

Russia’s central bank sought to calm market nerves on Sunday, saying it would offer unlimited liquidity to banks. “The Russian banking system is stable, and has sufficient capacity of capital and liquidity to function in any situation,” it said.