Russia’s highly regarded central bank Governor Elvira Nabiullina sought to resign after Vladimir Putin ordered an invasion of Ukraine, only to be told by the president to stay, according to four people with knowledge of the discussions.

Nominated for a new five-year term last week, Nabiullina’s current views could not be learned. She is left to manage the fallout from a war that’s quickly undone much of what’s she accomplished in the nine years since she took office. The people said departure now would be seen as a betrayal by the president, with whom she has worked closely for nearly two decades.

Nabiullina, 58, has not commented publicly on her reappointment and did not respond to a query for this article. Spokespeople for the central bank and the Kremlin did not reply to requests for comment. Only one senior official has quit over the war: longtime economic reformer Anatoly Chubais stepped down as Putin’s climate envoy this week and left the country, according to people familiar with the situation.

Nabiullina, favored by investors and hailed by publications including Euromoney and The Banker as one of the world’s best monetary policymakers, now faces a wartime economy isolated by international sanctions and starved for investment as foreign companies leave.

With the ruble plunging as the US and its allies imposed sweeping sanctions – including on the central bank itself – in the wake of the Feb. 24 invasion, she more than doubled the key interest rate and imposed capital controls to stanch the outflow of cash.

The central bank said it gave up interventions to defend the ruble after international restrictions froze more than half of its $ 643 billion in reserves.

“As long as there’s an escalation, the central bank can only adapt to shocks,” said Oleg Vyugin, a former top Bank of Russia official who’s known Nabiullina for over 20 years.

Some central bank officials describe a state of hopelessness in the weeks since the invasion, feeling trapped in an institution that they fear will have little use for their market-oriented skills and experience as Russia is cut off from the world. At one point, the pace of departments was intense enough that the IT department was short of hands to terminate accounts. Arrows plastered along passageways steered employees through the final bureaucracy on their way out.

Other departments hunkered down under a heavier work load than usual and even saw a barrage of resumes arrive from banks targeted by sanctions.

Before the invasion, officials modeled scenarios that included a possible cut-off from the SWIFT financial messaging service but considered the possibility of sanctions on the central bank’s reserves too extreme to be anything but hypothetical, people familiar with the situation said. 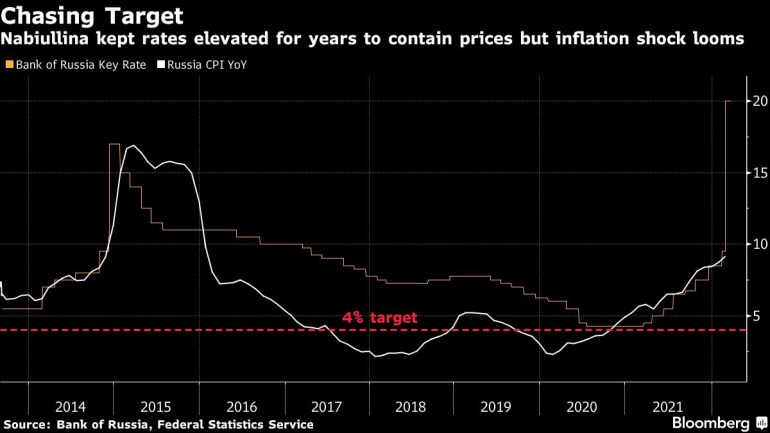 Putin said earlier this month he’s confident Russia will overcome the current economic difficulties and emerge more independently. Comparing the current wave of restrictions to those imposed on the USSR during the Cold War, he said, “the Soviet Union lived under sanctions, developed and attained colossal successes.”

In a brief statement last Friday after deciding to keep rates near a two-decade high of 20%, Nabiullina put off achieving her 4% inflation target until 2024 and warned the economy is headed for contraction and upheaval with no clear end in sight. In a break with recent tradition, she did not take questions after the rate meeting.

Economists predict a double-digit drop in output this year, while the ruble’s collapse and shortages of goods may touch off inflation of as much as 25%, a level not seen in Russia since the government’s 1998 debt default. 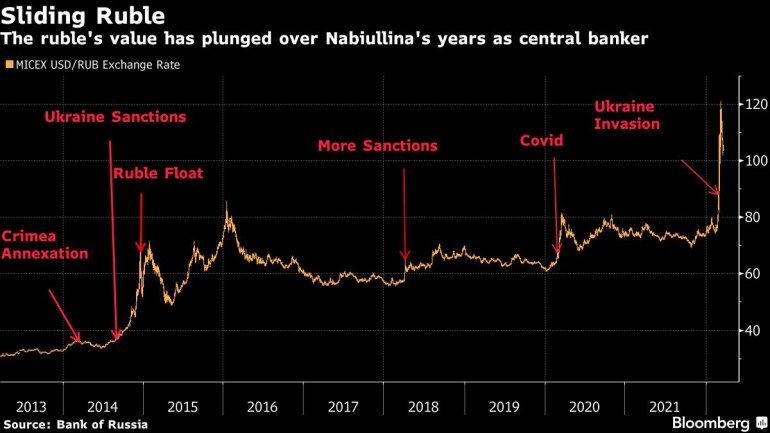 In a short video to the central bank’s staff on March 2, Nabiullina hinted at the upheaval inside, pleading to avoid “political debates” that “only burn our energy, which we need to do our job.” Describing an economic situation she called “extreme,” the governor said “all of us would have wanted for this not to happen.”

Until now, the crisis that followed Putin’s annexation of Crimea in 2014 was the biggest test of Nabiullina’s free-market mettle.

She fought against capital controls – advice that was then heeded by Putin – and set the ruble free, shifting to inflation targeting earlier than planned.

Under her stewardship, the central bank amassed one of the world’s biggest stockpiles of foreign currency and gold, cracked down on lenders deemed mismanaged or under-capitalized, and brought inflation to the lowest in Russia’s post-Soviet history.

“When Nabiullina came in, no one thought she’d be able to stabilize inflation,” recalls Natalia Orlova, economist at Alfa-Bank. “She brought the central bank up to absolutely international standards.”

European Central Bank chief Christine Lagarde, a fellow opera-lover then in charge of the International Monetary Fund, in 2018 likened her qualities to those of a great conductor.

Foreign investors poured billions into Russian debt. Putin trusted her, listened to her opinion and defended her tight-money policies in front of other government officials. But much of her legacy came undone in a matter of hours after the sanctions laid siege to Russia’s economy.

The path forward is less obvious than in crises past. An emergency rate hike and restrictions on foreign-exchange transactions have for now bottled up problems in the banking industry, with Russian markets seeing only a piecemeal reopening. The threat of default is stalking the government and companies.

“There’s no hope for the central bank to return to its old policies,” said Sergei Guriev, professor of economics at Sciences Po Paris.

Guriev, who fled to Paris in 2013 and served as chief economist at the European Bank for Reconstruction and Development, has known Nabiullina for about 15 years.

“She did not sign up to work in wartime,” he said. “She’s not the kind of person who can work with financial markets shut off and catastrophic sanctions.”