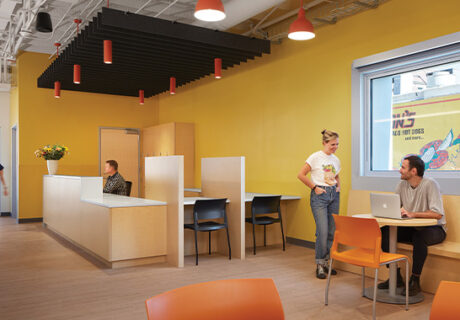 The center has occupied a variety of buildings throughout its history, most recently renting space in Chicago’s Lakeside neighborhood for programming that includes everything from full-service medical and reproductive healthcare to social services, as well as a drop-in center to fill basic needs such as hot meals, showers, and laundry. “That’s a lot of different services to have in one space, especially when that space is only 4,000 square feet,” Reynolds says. So when the center’s lease was ending, the organization decided to launch a capital campaign to raise funds to build a facility custom designed for it. The five-story, 20,000-square-foot building would house all of BYC’s services under one roof, with space for increased medical care and expanded offerings such as a “store” for donated clothing and a commercial kitchen to provide meals and culinary programs. “We set out to build a [center] that could serve young people in a more robust way and also have a permanent home for BYC, ”Reynolds says.

Kicking off the project in fall 2019, Wheeler Kearns Architects (Chicago) was tasked with helping BYC take its operations, which had been organized within a one-story setting, and divided them among its new five floors. “Early on, we decided that the drop-in space for the young people was going to be on the upper two floors, so they have the best views and could be secure and have their own space,” says Noah Luken, project architect at Wheeler Kearns Architects. Then, to maximize access to clinical services, the exam rooms and reception area are located on the first and second floors, while the third floor is devoted entirely to staff, with conference and meeting rooms, a break area, and open-office workstations that are convenient to both the clinic spaces and the day programs. “A lot of our staff are dealing with pretty intense work on a daily basis,” Reynolds says. “Having that space where they can separate from it and take a short break can be restorative and also helps with burnout.”

In addition to better supporting staff, the facility houses details big and small that respond to the emotional and social needs of its clientele, some of whom do not have a lot of resources or history of accessing healthcare. “We used light, friendly, colorful materials that did not feel like a typical healthcare setting or feel childish,” Luken says. “Having a youthful exuberance was important to us.” For example, the lobby is designed to resemble a café with bright yellow walls and local artwork. Additionally, a dance and movement space on the fifth floor holds classes as well as group meetings. “Having those spaces where young people can experience joy makes it a space where people want to return, continue to access services, and build relationships with staff,” Reynolds says.

Do not be a 2-factor ‘phushover’

DEEP DIVE: How the legacy of Expo 2020 Dubai can shape the future of healthcare