Veronika Mironova, who runs a home for sick and abandoned pets in the city of Voronezh in southern Russia, rushed to stock up on special medical cat food as sanctions against the country started to hit. She feared that prices on the imported products could soon soar and supplies run short.

“Only afterwards did I realize that I needed to be doing the same for myself,” said Mironova. The 39-year-old has diabetes and she looks after her mother, too, who also suffers from the disease. They rely on drugs and medical devices from Denmark, Ireland and Japan.

“But by then it was too late. All the medicines were gone. Insulin was missing here and in Moscow, ”said Mironova, speaking by telephone from her home in Voronezh, less than 200km from the border with eastern Ukraine.

From medical devices to staple goods and electronic devices, prices on many products have shot up as sanctions imposed in response to the invasion of Ukraine blow a hole in Russia’s economy. Panic buying of staple goods whose prices were capped has been widely reported, as Russians anticipate shortages of imported goods and a cost-of-living crisis after the ruble plunged in value.

The price for new cars made by foreign brands was on average 16 per cent higher last week than in February, according to the state statistics service, while televisions had risen by 20 per cent, vacuum cleaners 17 per cent and smartphones 12 per cent.

“It’s a spike in panic demand because of expected shortages,” said a Moscow-based economist who asked not to be named. “It’s inflation of the middle class rushing to buy something – inflation of the poor will follow.”

The cost of some food products, such as sugar, bananas and tomatoes, has risen more than 15 per cent since last month, the service added.

Admitting the economic pain caused by the sanctions, Vladimir Putin, Russia’s president, on Wednesday said he would raise pensions and salaries. “I understand that rising prices are seriously hitting people’s incomes,” he said. The government has set up a hotline for people to complain about unfair price rises.

For many, though, the measures may not be enough. In the week to March 15, nearly half of those earning less than Rb50,000 ($ 506) a month said their financial conditions had worsened over the past year, 4 percentage points up from the week to February 15, according to data group Morning Consult .

Economists expect a combination of sanctions, high interest rates, soaring inflation, capital outflows, lower business investment and weak consumer confidence to drag Russia into a deep recession this year. Scope, the rating agency, forecast that the economy would shrink by more than 10 per cent this year, having predicted growth of 2.7 per cent in December.

In the first week after the invasion, there was a Rb2.5tn outflow of cash from the Russian banking system, according to the country’s central bank, as depositors queued up in the street to withdraw funds. But central bank interventions have since helped to stabilize the economy. The monetary base – the total cash in circulation and held in bank deposits – increased by 14 per cent to more than Rb16.3tn in the past month.

“Russians took several trillion rubles out of banks in the first days of war, but now it’s coming back because of higher rates, no major bank failures and capital controls,” said the Moscow-based economist, adding that a “banking collapse” had been “averted”.

Dmitry Peskov, Kremlin spokesman, said last week that he hoped “that fewer than millions of people” would be out of work.

For now, Russian social media channels are flooded with pictures of empty shelves in supermarkets and videos of people scrambling to buy bags of sugar and grains.

Mironova said she had seen empty shelves in Voronezh, too. “People here are buying up sugar, flour and buckwheat in the tonnes.”

“We’re not doing that,” she said, adding that she thought there was no risk to food supplies and no need to fuel a run on buckwheat in an agriculturally rich region. 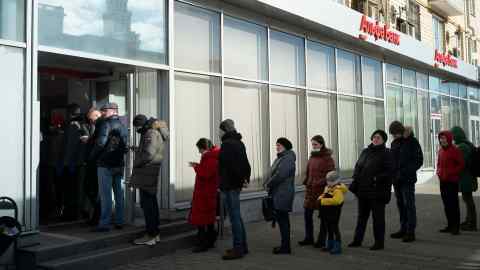 Food products were among the least likely to be affected by sanctions, analysts said, since the largest supermarkets stock a relatively small share of imported goods. Russia has boosted agricultural production since 2014, when it restricted imports of some fresh products from Europe in retaliation for sanctions imposed after its annexation of Crimea.

But one executive at a major Russian retailer, asking to remain anonymous, said: “The problem will be with imported goods. All prices for imported goods are being raised. What will come next is unclear, to be honest. ” His business had already raised prices on some imported beverages.

Writing on the social media platform VKontakte, after Instagram was banned by the Russian government, one St Petersburg-based baker said prices on the Belgian chocolate and French cocoa she uses in her cakes had already risen 25 per cent. Basics like nuts and dairy products were also on the rise.

Many Russians who earn money from overseas commerce have also been cut off from their source of income, unable to receive international payments because Visa, Mastercard, Western Union and PayPal suspended operations. Some have rushed to sign up to China’s UnionPay payments system, but face weeks of delays because of shortages of plastic cards.

At home in Voronezh, Mironova said she had struggled to find the drugs she needed, and only had enough medical supplies for the next two months. She hopes that the government health service will provide her with imported insulin at an appointment next month, but fears that it is unlikely.

For the time being, Mironova said she has stocked up on sedatives instead, – the only way she can handle the stress of a war that she wants to end. Her home is near an air base, and she hears the roar of fighter planes taking off in the direction of Ukraine from dawn until dusk.

“People understand that at some point things will change, but they do not know when. A month? Two? How much time has to pass? ”

No shelter for the Fed

Philippines has ‘luxury of waiting’ to raise rates after Covid rebound