Sterling dropped to its weakest level since late 2020 after a sharp drop in British retail sales underlined the depths of the cost of living crisis fueled by surging inflation.

The volume of retail sales in Great Britain fell 1.4 per cent, the Office for National Statistics said, worse than the 0.3 per cent drop forecast in a Reuters poll and the second consecutive monthly decline.

The figures, which prompted many economists to forecast that the Bank of England would hike interest rates less aggressively, triggered a 0.7 per cent drop in the pound against the US dollar to $ 1.2939.

This is the first sign in the official data of the toll that high inflation is having on consumer spending and the economy, noted Thomas Pugh, economist at the consultancy RSM. He also warned that “there is worse to come” over the next few months as the cost of living crisis is likely to worsen in April, with a hike in energy bills and taxes.

Separate data released on Friday by the research company GfK showed that, in April, UK consumer confidence plunged to a near all-time low since records began in 1974, reflecting the impact of the cost of living crisis. 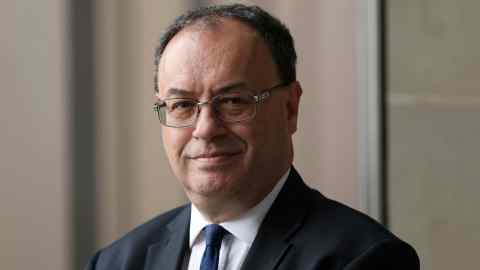 For many economists, the fall in both retail sales and consumer confidence adds pressure on the Bank of England for a more cautious approach in hiking rates as the bank tries to rein in accelerating inflation.

“Despite repeated upside inflation surprises, we think the Bank of England is likely to tread more carefully on rate rises than markets expect,” echoed James Smith, economist at ING. “It’s getting increasingly difficult to see how UK consumer spending avoids a downturn over the coming months.”

ONS data showed that online sales were hit particularly hard due to lower levels of discretionary spending. They slipped 7.9 per cent in March compared with the previous month, the largest monthly fall since January 2001. The drop followed a substantial contraction in February.

Food store sales volumes slid 1.1 per cent in March and have fallen each month since last November as a result of higher spending in pubs and restaurants as Covid restrictions have eased and the impact of rising food prices on the cost of living. Spending in alcoholic drink stores also shrank sharply by 11.3 per cent.

ONS data showed that shoppers only marginally reduced the value of what they spent on the high street, down 0.2 per cent, but with inflation at the highest pace in 30 years, the volume of goods they were able to buy shrank significantly.

Jackie Mulligan, founder of ShopAppy, a website for local producers, said that “for countless small independent retailers, March was merciless. The small businesses that line the country’s high streets need our support more than ever. ”