In this column last week, I speculated how stock market volatility might spook younger investors. However, comments from readers in their 20s and 30s demanded answers to a different investment dilemma.

“Could somebody answer how on earth young people are going to buy a house AND save for retirement?” asked 22-year-old Scott Wijayatilake.

Voted “top comment” by dozens of other readers, he outlined how his generation faced huge student debts, higher taxes plus an asset bubble that has pushed property prices out of reach, and inflated equity valuations to ridiculously expensive levels.

Add slow wage growth and soaring global inflation to the mix, and Scott fears the traditional 60:40 portfolio, split between equities and bonds, is no longer going to cut it: “How can you build anything resembling wealth with such low returns? ”

For many young investors, the answer has been to target higher-risk investments.

More than one million UK adults bought or increased their holdings of high-risk investments such as crypto during the pandemic, according to research from the Financial Conduct Authority this week.

With limited cash to invest and ballooning asset prices, you can see the allure of betting on high-risk assets with the hope of hitting the jackpot.

Crypto, peer-to-peer and using trading apps and spread betting platforms to make short-term punts on stocks and foreign exchange are closer to gambling than investing – but given the pedestrian returns elsewhere, young people are tempted to take an “all or nothing ”approach.

Even those who invest in more traditional ways are moving up the risk curve. Michael, an FT commenter in his 20s, has spent the past 18 months building a tech-heavy portfolio. This initially performed well, but has suffered in recent months: “I bought some dips, but the dips kept coming.”

Again, taking a long-term view has been complicated by his twin goals of investing for a house deposit, as well as for retirement (note the average first-time buyer deposit is now over £ 57,000, and more than double that in London) .

Rather than invest for both property and retirement, many young professionals select one to target. Deciding which to prioritize is difficult

A risky strategy, but the length of time to save up leaves cash at the mercy of rising inflation. The government tacitly encourages this route with the Lifetime Isa, which offers a 25 per cent bonus on money saved or invested towards a first property (watch out for the £ 450,000 property price cap).

Rather than invest for both property and retirement, many young professionals select one to target. Deciding which to prioritize is difficult, but at least they have a choice. For many young workers on lower incomes, it may well be neither, as the cost of living squeeze continues.

The recent decision to freeze the student loans repayment threshold at £ 27,295 will cost post-2012 graduates in England and Wales an extra £ 110 a year, on top of national insurance increases.

There’s been no word from officials about when the link with earnings might be reinstated. Because of the way the system works, it’s estimated three-quarters of university leavers will never fully repay their debts. Instead, they will pay an extra 9 per cent tax on everything they earn above the threshold for 30 years until their loans are written off.

For grads who are basic-rate taxpayers, every pound they earn above that frozen threshold from April will be taxed at 42.25 per cent (income tax of 20p, national insurance of 13.25p and a further 9p to repay the loan).

For those who can afford to get on the property ladder (most with parental help) the rise of the 40-year mortgage is yet another generational shift.

Mattcan, an FT reader in his early 30s, confessed to creaming off the returns from the index trackers in his Isa, and using these to overpay his home loan. He took some flak for this risk-averse strategy, but this week’s interest rate rise reminds us that the era of cheap money cannot last forever.

The financial juggling act is further complicated by the high cost of starting a family (note that half of women in England and Wales do not have children by age 30).

FT reader Tench finds it impossible to save anything at all since having children: “The nursery fees consume most disposable / investable income. . . our retirement seems a laughably distant dream. ”

Recent research by the Institute for Fiscal Studies offers some hope, suggesting those who reduce retirement saving in their 30s but contribute 15-25 per cent of pay in their 40s and 50s could achieve broadly the same result.

A hefty sum, but the IFS reasons higher salaries and the tailing off of childcare costs means it’s possible. As student loan debts are written off after 30 years, graduates in their early 50s could be nudged into saving that 9 per cent slice of their salary into a pension instead. 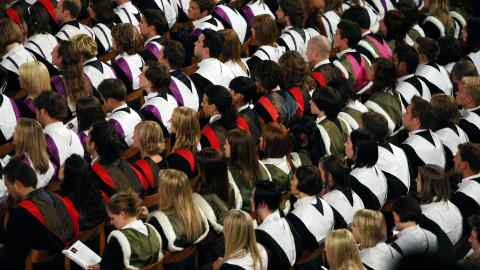 However, constant tinkering with rules governing pensions and the student loans system makes it impossible for young people to plan with any degree of certainty.

There are no guarantees that the 30-year cut-off will not be extended in the future. Furthermore, readers grappling with the nightmare of the annual allowance taper (which gradually reduces what higher earners can save into a pension from £ 40,000 to just £ 4,000 a year) will laugh at the idea of ​​ramping up their contributions in later life.

Plus, if your employer pension contributions are more generous than the basic levels assumed in the IFS study, you might wince at leaving this money on the table. Do not forget that pensions are a valuable source of tax relief – and that includes the “graduate tax” of student loans.

At present, only the highest earners will clear their entire student loan debt within 30 years. Graduates on lower incomes who take a career break or work part-time while raising a family are much less likely to do so – and the IFS makes an important point for them.

If your employer offers “salary sacrifice” arrangements, you have an additional incentive to save into a pension. Because this has the effect of reducing your gross earnings, it will also reduce the amount sliced ​​off by those 9 per cent student loan repayments. In the words of the IFS, this is “analogous to reducing your total lifetime tax liability”.

As helpful as these suggestions might be for some young readers, the widening intergenerational divide means this is fiddling around the edges for most – yet this sort of “leveling up” is not on the political agenda.

I’ll give the last word to 22-year-old Scott. “Are young people just hoping to inherit, or simply not thinking about it? My bet is on the latter. ”

For the latest news and views on fintech from the FT’s network of correspondents around the world, sign up to our weekly newsletter #fintechFT