Przemysl, Poland – The main train station in Przemysl, a city close to the Poland-Ukraine border, is full of hundreds of passengers arriving from the western Ukrainian city of Lviv.

While the distance between the two cities is less than 100km (62 miles), the journey has taken hours for many people since the beginning of Russia’s war against Ukraine.

The corridors in the high-ceiling halls of the station are packed with those who fled their homes looking for safety in other European countries. Along with Ukrainian women and children, there are thousands of foreigners who had made Ukraine their home.

Ever since the all-out war began on February 24, Poland opened its borders to anyone fleeing war regardless of nationality and documents held. More than 450,000 people have so far crossed into the country.

In total, the United Nations has estimated that more than 830,000 people had fled Ukraine.

In the halls of Przemysl station, non-Ukrainian refugees seemed to outnumber Ukrainians.

Navid, 32, sat on the floor, his red eyes revealing the little sleep he has had. He was trying to rest but his children would not let him as they wanted to sit on their father’s lap and touch his face, inviting him to play.

Navid came to Odesa from Afghanistan in 2007. His family had made the Ukrainian coastal city their home, where they ran a successful business selling phone and computer accessories.

“Since they took Crimea, I knew it would only get worse. When they created separatist groups in eastern Ukraine, I felt that Russia was going to invade, ”he said, tears coming to his eyes.

“When the war started, I was in Odesa and I heard missiles being fired, that’s why I decided to leave. But I consider Ukraine my country and I wanted to stay as long as I could. ”

Navid said that once the war ends, he wants to go back to Odesa – but only if the city remains under Ukrainian control.

“I do not want to live under the Russian regime,” he said.

Next to Navid sat a young couple. Heda, 22, from Morocco holds a small Pekinese dog called Linda on her lap. Adnan, 23, is a British national of Afghan descent. The couple – just like thousands of other refugees in the station – were foreign students in Ukraine.

They studied medicine in Dnipro. When they heard about the attacks against the nearby city of Zaporozhye, they decided it was time to flee.

“We took a bus that left us about five kilometers (three miles) from the border. It took about 27 hours to get there. But many international students are still stuck in Ukraine and our embassies are not really helping, ”Adnan said, adding that the British embassy had advised him to look for transport himself.

“The airports were closed, the trains did not run, and it was difficult to find a bus. There were companies that promised people to take them to a certain destination and then ask them to pay extra. It happened to our friends. ”

Adnan and his friends paid the equivalent of more than $ 300 for five bus tickets, but the bus never arrived. When asked if they have faced any discrimination while crossing the border, the couple nodded.

“It was freezing at the border. We did not get any food, ”Adnan said. “As a man, I was not allowed to stand next to a bonfire made by the Ukrainian guards. The girls were allowed for about 20 minutes up after the Ukrainian women and children left the border. ”

“Many people jumped the queue. It happens especially when you do not speak the language. But I do not think it has anything to do with race or skin color. All foreigners are treated this way. They prioritize Ukrainians. ”

The couple said they did not face any discrimination once they reached the Polish side.

Chinoso from Nigeria stands in front of the train station waiting for a car. The 36-year-old studied business and resource management in Kyiv and worked in a tour agency. It took him 27 hours to get to Lviv.

“People were frightened, they left behind all they had, buildings were destroyed. I could hear the sirens, people were asked to go to bunkers or to the metro. There are still many families in the bunkers, ”he told Al Jazeera.

He planned to stay in Poland in the hope that the situation in Kyiv goes back to normal soon. Kyiv is his city, he said, and he would not like to live anywhere else. He also said he did not experience any discrimination at the border.

“The guards are just trying to control the crowd, but it’s not racism. I have not experienced any racism. Not at all, ”he said.

While most refugees of color Al Jazeera interviewed did not report any racist episodes, others present a completely different side of the story. 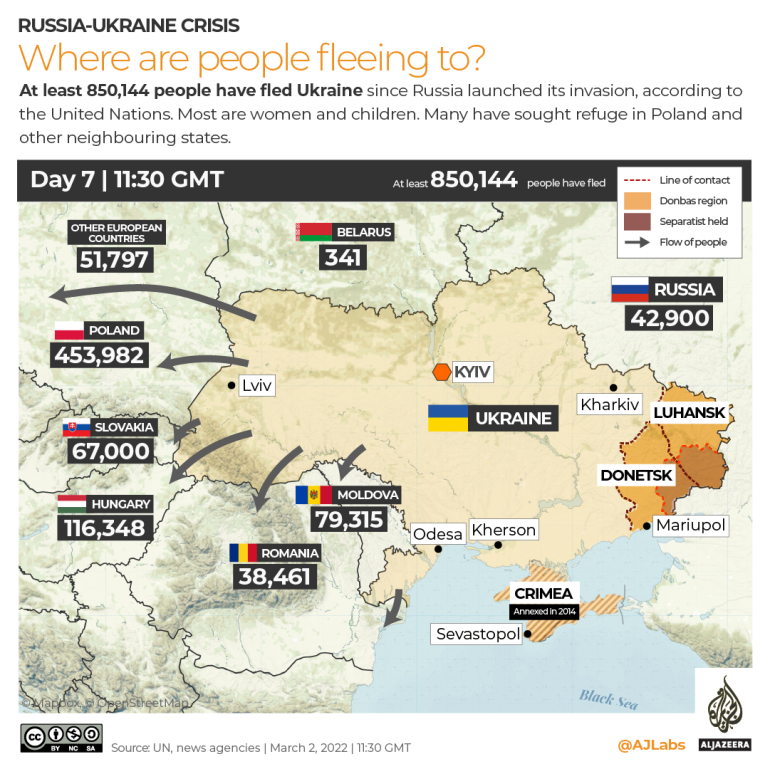 Rubi, a 35-year-old international student from India, returned for offline classes to Kyiv only last month. She left all her belongings in her new apartment and escaped the city with 25 Indian and Bangladeshi friends. According to her, they have not received any help.

“Everything is free for Ukrainians only. But we are also part of Ukraine, ”she said. “One person at the border told us that we can not cross. Imagine, we walked 30km (18 miles) and the man is saying something like this. We could not get any transportation, we do not have any accommodation, no one is there to help us. ”

Anna Alboth from Minority Rights Group confirmed that racial discrimination, while not systemic, is a fact.

“Discrimination mostly takes place on the Ukrainian side of the border. But there are people in Poland offering free transportation who refuse it once approached by a non-Ukrainian refugee. We receive messages from Nigerian and Indian students who could not handle the fact that they are treated differently and returned to Lviv, ”she said.

While the scale of humanitarian assistance by individuals and organizations in Poland has been far greater than expected, it is important to remember that this war is affecting not only Ukrainians, Alboth said.

“We cannot divide people into worthy and unworthy refugees. Non-Ukrainians escaping the war face the same challenges as Ukrainians. We have to offer support to all people in need, not only to white ones who are similar to us. ”