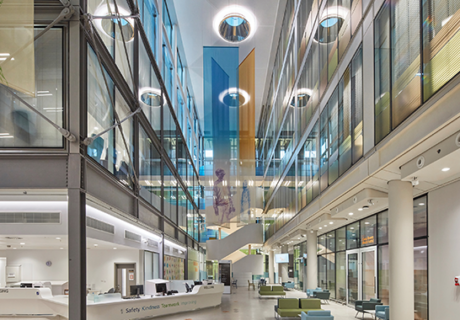 Situated in the heart of London, University College London Hospitals NHS Foundation Trust (UCLH) is a major teaching hospital that operates six facilities in Central London, making it one of the largest National Health Service (NHS) trusts in the UK In 2010, its role grew when NHS appointed UCLH as one of two organizations to house an NHS proton beam therapy center, with the other location at Christie Hospital in Manchester, England.

Maximizing the opportunity, UCLH also decided to relocate and expand some of its existing services, including hematology and surgical, to the new facility to address growing demand. “Right from the start, we knew we wanted to create something special: a place where patients could receive the very best treatment in an environment that made it as straightforward as possible for our staff to deliver that care,” says Laura Churchward, director of strategy at UCLH.

An optimal site for the new hospital was found on an urban block next to other UCLH sites and near research partner University College London. However, it was located in a protected view area, which limits the height of new buildings to preserve views to a national landmark, in this case St. Paul’s Cathedral.

After considering nearly 40 design options, which included locating the proton therapy center above ground, the project team decided that going down — 93.5 feet, to be exact — might be the better solution. It would address the necessary structural and radioactive shielding needs of the proton center (including 6.5-foot-thick concrete walls) but also maximize the development potential of the site, Bates says.

“Utilizing the space in this way enabled us to deliver the best value for money and achieve the greatest possible clinical space in the area we had available,” Churchward says.

Recognizing that patients with blood disorders might experience long stays, the project team ensured the atrium and patient rooms feel open and bright by providing access to natural light and views via floor-to-ceiling glass walls.

For the overall interior design, inspiration came from the concept of English gardens, which guided the color tone, materials, furnishings, and artwork selection. For example, a video frieze along the top of two walls adjacent to the proton therapy area has a dynamic movement of clouds and various skies, from dusk to dawn, to work with circadian rhythm. “The light and sense of space within the hospital was important to us, as well as the artwork,” Churchward says. “With much of the building below ground, having pleasant spaces is hugely important.”

The integration imperative: achieving a future vision for healthcare