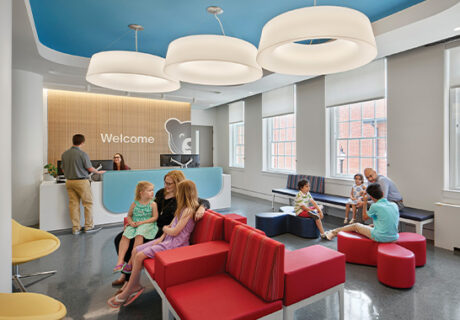 When the Building 52 medical ward opened in the 1930s on the campus of Walter Reed Army Medical Center in Washington, DC, the multistory building featured open-air sleeping porches for Army personnel suffering from tuberculosis. (Fresh air and sunshine were widely prescribed ways to help rid the body of the infectious disease affecting the lungs.) As new treatments evolved in the aftermath of World War II, such spaces were no longer needed, and by the 1960s the facility’s open- air wards had been walled over and the facility was being used as an outpatient clinic for Army soldiers.

When the Reed complex merged into the National Naval Medical Center in Bethesda, Md., In 2011, the facility was closed and the building sat vacant. Five years later, Children’s National Hospital in Washington, DC, acquired the structure along with two neighboring buildings and a parking garage for development into a new clinic and research and innovation center, part of an ongoing effort to establish satellite clinics around DC

Renamed Children’s National Shepherd Park, after its surrounding neighborhood, the new 24-exam room pediatric clinic on the top two floors of the former medical ward is the organization’s 15th such branch. “By transferring medical staff from our main hospital to the clinic we can provide much more convenient access to care for more than 20,000 children living in that part of the District,” says Charles Weinstein, executive vice president and chief real estate / facilities officer at Children’s National Hospital.

Overseeing the update to the former clinic were Array Architects (Conshohocken, Pa.) And Elkus Manfredi Architects (Boston). The changes included refreshing the entry zone with colorful furniture in a variety of configurations and adding colored accent walls and an asymmetrical floor pattern in the clinic’s main corridor to aid wayfinding. The building’s rectangular layout lent itself to a linear flow of patient care with an onstage / offstage configuration that places exam rooms in the core, surrounded by a U-shaped corridor for provider workspaces. “The layout gives patients and their families a measure of privacy, and also gives staff immediate access to areas for workstations and for private consultations with other staff members,” says Irene Thompson, executive director of real estate and capital planning at Children’s National Hospital .

To create an optimal work environment and to help boost staff morale, the design team sought to maximize natural light in the perimeter corridor by removing the concrete used to wall over the sleeping porches and installing a curtain wall incorporating glazed glass. Because the building was placed on the National Register of Historic Places in 2015, the exterior updates had to reflect its original appearance, says Clairanne Pesce, a senior interior designer at Array (Washington, DC). “As a result, the brick, window frames, and painted surfaces we used on the new curtain wall and elsewhere on the building matched those seen in historical photos of the building as closely as possible.”