Inside every car sits almost three miles of electric cabling. The snaking wires carry instructions, from steering the wheels to opening the boot.

This jumble of motoring spaghetti is held together by the harness, a low-cost part that, until the invasion of Ukraine, vehicle manufacturers almost took for granted.

Both BMW and Volkswagen have both been forced to idle plants across Europe after Russia’s invasion forced Ukrainian wiring plants to shut down.

Now the country’s fledgling auto industry, which boasts close to 40 parts factories, is at risk, as carmakers race to relocate or duplicate the bespoke equipment needed to make harnesses.

“The problem with wire harnesses is that they are fundamental,” said Alexandre Marian, managing director at consultancy AlixPartners in Paris. “You can not start assembling even an incomplete car without wire harnesses.”

Unlike other parts that can be easily made elsewhere, harnesses are bespoke. Each car model has its own individual system, honed to the millimeter, so manufacturers can squeeze wires around the vehicle.

Herbert Diess, VW chief executive, said: “In our case, as we are positioned in premium or close to premium, most of the wiring harnesses we put in the cars are car specific. So, it’s a one-to-one relationship. ”

Obviously, long term, we’ll have to assess if and when it makes sense to go back to Ukraine.

But shifting production is a logistical headache.

“They are a mix of different cables, you can not put all 100 pieces together in a box and send it over,” explained one person familiar with the process. “They are a big transportation problem.”

VW’s Diess said: “Currently, we are. . . trying to get the most out of the wiring harness production in the Ukraine, but in parallel, right from the start of the conflict, we started to work on alternatives, which are on the way. ”

Those alternatives include shifting equipment, which is difficult with unreliable border crossings, or replicating it from scratch, which is expensive and takes time.

Leoni, which has two sites in the country as well as plants in Serbia, Romania and north Africa, said it is “working nearly around the clock to constantly analyze and evaluate the dynamic developments on site”.

“We are currently examining all options to compensate for the production interruptions,” the company said.

“There is a fair amount of skilled manual work in making harnesses,” said Dominic Tribe, a supply chain expert at Vendigital consultants. “It’s complicated with sometimes kilometers of cables and hundreds of connectors that might need to be manually wrapped and tested.”

New equipment needed to build harnesses runs from £ 100,000 to about £ 2mn, he said, and takes between three and six months to build, according to industry estimates.

Some Mini customers have been told to expect further delays of three months, while new factories are found to make the parts.

“We are working with our suppliers affected by the Ukraine crisis to find solutions together, and to support them in implementing these solutions, whether that’s maintaining production in Ukraine or in alternative locations,” said BMW, which closed two German plants and the Mini facility in the UK.

Even though both BMW and VW have restarted plants, they will be unable to make models whose harnesses remain stranded in Ukraine.

Some suppliers in Ukraine have started restarting operations, according to car manufacturers, suppliers and people familiar with the situation.

On Tuesday, VW said nine out of its 11 suppliers in the country were running, albeit at reduced capacity. “We are able to produce in most of our plants, but [at] a reduced rate of capacity, ”said Diess.

A big problem is shipping finished goods across the Polish and Ukrainian border to the waiting car plants.

There is a severe shortage of truck drivers, who are largely male and hit by the conscription laws that prohibit them from leaving the country.

Some plants have turned to former retirees, who are over the conscription age limit, in order to move products, according to an employee at one of the Ukraine groups. 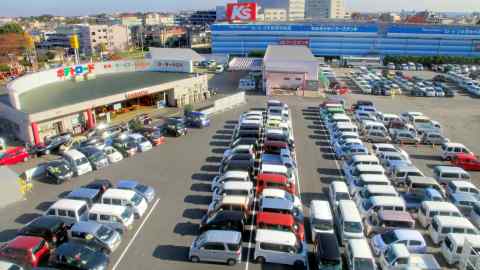 Many of the trucking companies outside the country are reluctant to send vehicles across the border for fear they will not return, according to two people briefed on the situation.

Even once trucks and drivers are located, the border crossings have been completely overwhelmed by the refugees and are all-but closed to traditional business freight.

“If you send a truck, you can not say whether it will be in Poland in three hours or three days or will be sent back,” said one person. “We have to check day by day, it is possible to send one truck today, or two trucks.”

“Effectively, at this point, the country is not open to any type of normal commercial activity,” said Joseph Massaro, the chief financial officer of Aptiv, a US car parts supplier.

The company, which has two plants in western Ukraine, has begun moving parts out of the country into existing Aptiv facilities in Poland, Romania and Serbia. The relocation, which is being aided by VW, also includes the workers and their families, people familiar with the operation said.

However, at the factories in Ukraine, workers have been largely unaffected by the violence, according to several of the suppliers operating in the country.

Because assembling harnesses requires extreme dexterity, most employees in the factory tend to be women, who are not covered by Ukraine’s conscription laws for men between 18 and 60.

One supplier estimated that three quarters of its workers are women, many of whom have been offering to come to work if it is safe.

“It’s amazing how the people are motivated and willing to support the company,” said a manager at one of the supply groups.

But for Ukraine, the risk is that should carmakers shift production westward, the harness industry in the country may suffer terminal decline, several executives said privately.

Massaro at Aptiv added: “Obviously, long term, we will have to assess if and when it makes sense to go back to Ukraine.”