The 31 per cent increase in the country’s trade deficit in goods came as its economy rebounded strongly from the fallout of the coronavirus pandemic, with annual growth of 7 per cent last year.

Soaring energy prices last year boosted the value of French goods imports to 3 per cent above 2019 levels – before the Covid-19 crisis disrupted global trade. Meanwhile, the country’s manufacturers lost market share in exports, leaving them 2 per cent below pre-crisis levels, according to French customs.

Goods exports from France’s main EU trading partners were between 3 and 9 per cent above pre-pandemic levels, customs said in a statement, adding: “France’s loss of market share, almost uninterrupted since 2010, will continue in 2021.”

Le Maire said the figures highlighted “the industrial weakening over the past 30 years”. Emmanuel Macron’s government had been tackling the problem by “creating a more favorable tax environment, by lowering production taxes, by training and qualifying employees for new industrial professions”, he added.

“There is no other solution to restore France’s external trade balance than to reindustrialize our country massively and quickly,” Le Maire told France Inter radio.

In contrast, the country’s trade balance for services improved to a record surplus of € 36.2bn, meaning that overall foreign trade still provided a slight boost to the economy last year.

Franck Riester, trade minister, said it was “important to look at the full picture of our commercial activity”. He added that “strong export sectors are still below their 2019 level”. These include aerospace manufacturing, which stands at 57 per cent of pre-pandemic exports.

Claus Vistesen, chief eurozone economist at Pantheon Macroeconomics, said large parts of French manufacturing were in “sectors that were doing quite poorly due to overcapacity before the pandemic and are still struggling to rebound from the crisis”, such as aerospace and car making. 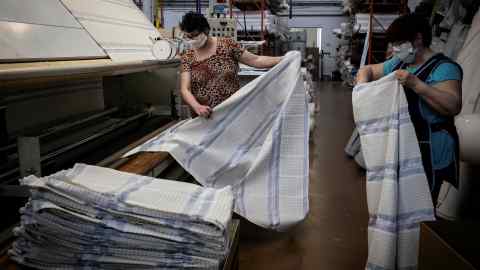 France’s trade surplus in goods with the UK shrank last year to € 7.6bn, down 40 per cent from 2019 before the pandemic and Brexit disrupted cross-channel commerce. Its deficit in goods trade with China has widened by 27 per cent to € 34.6bn since 2019.

Vistesen said: “Part of this could be a eurozone-wide phenomenon, as the bloc’s trade deficit with China has been widening in recent years.”

Riester said continued rises in energy prices were likely to mean that the country’s trade deficit would remain elevated this year. BNP Paribas forecast the French trade deficit in goods would rise to € 100bn this year.

US agrees to ease tariffs on UK steel and aluminum imports