Eurozone consumer prices rose by a record 5.8 per cent in February, underscoring fears that the war in Ukraine will drive up the cost of living and increasing pressure on the European Central Bank ahead of its meeting next week.

February’s flash estimate for annual eurozone inflation was up from 5.1 per cent in January and was above the 5.4 per cent average forecasts of economists polled by Reuters. ECB Vice President Luis de Guindos described the inflation figure for February as “a negative surprise” and predicted that the war in Ukraine would raise prices further and hit growth.

The jump in the cost of living in the eurozone to well above the ECB’s 2 per cent inflation target has put the central bank in a difficult spot, creating tension between officials who are pushing for tighter monetary policy to tackle inflation and those who want a break to assess the economic impact of Russia’s invasion of Ukraine.

Steeper increases in the price of energy and food in February were accompanied by higher surges in the cost of services and manufactured goods, Eurostat said on Wednesday. Energy prices rose by a record 31.7 per cent in February, while unprocessed food prices rose 6.1 per cent.

Excluding more volatile energy, food, alcohol and tobacco prices, core inflation increased from 2.3 per cent in January to 2.7 per cent in February. The highest national annual inflation rate was in Lithuania at 13.9 per cent, while France had the lowest at 4.1 per cent.

On a month-by-month basis, consumer prices rose by an unprecedented 0.9 per cent, indicating that inflationary pressures were building rapidly in the 19-country bloc.

Joachim Nagel, head of Germany’s central bank, has repeated his call for the ECB to hold its nerve on withdrawing its stimulus by ending net asset purchases and raising interest rates this year. “If price stability requires it, the governing council must adjust its monetary policy course,” he said in the Bundesbank annual report on Wednesday. “We need to keep our sights trained on the normalization of our monetary policy,” he added.

Economists are predicting eurozone inflation will rise above 6 per cent in March, as the Ukraine crisis causes significant disruption to the energy and commodity markets.

Melanie Debono, senior Europe economist at Pantheon Macroeconomics, said the ECB would have “no option but to end quantitative easing quicker than it currently plans” and predicted that its net bond purchases would stop in October and it would raise rates in December.

However, several ECB governing council members said this week the potential for the war in Ukraine to hit growth and confidence should delay any tightening of monetary policy, even though it is also likely to drive energy and other prices higher.

The heads of the Portuguese and Greek central banks have warned the crisis in Ukraine risks plunging the eurozone into a period of stagflation – a toxic mix of stagnating growth and inflationary supply pressures.

Fabio Panetta, an ECB executive board member, said: “We should aim to accompany the recovery with a light touch, taking moderate and careful steps as the fallout from the current crisis becomes clearer.”

Elga Bartsch, head of macro research at the BlackRock Investment Institute, said without the “horrific events in Ukraine” the ECB would have been likely to signal plans for raising interest rates by the end of the year at next week’s meeting.

“But now they are likely to want to keep the option open to push that out into next year.” 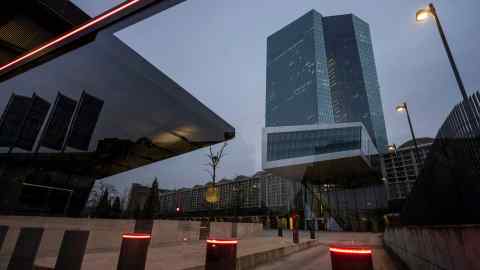 Government bonds rallied this week as investors bet the economic fallout from Russia’s invasion of Ukraine would push central banks to raise interest rates more slowly than previously anticipated. Germany’s 10-year bond yield sank below zero for the first time in a month.

Katharina Utermöhl, senior economist at Allianz, said a further ramping up of western sanctions on Russia, including on energy imports, could push the eurozone economy into recession – defined as two consecutive quarters of negative growth – and drive average inflation to 6 per cent for the whole year.

This combination of a contraction in growth and high inflation would lead the ECB to “shelve its policy normalization plans for 2022 altogether”, Utermöhl predicted.

US warns wealthy Russians against shifting assets to evade sanctions

Why There Hasn’t Been A Mass Exodus Of Teachers

FirstFT: Scholz to warn Putin of western resolve on Ukraine